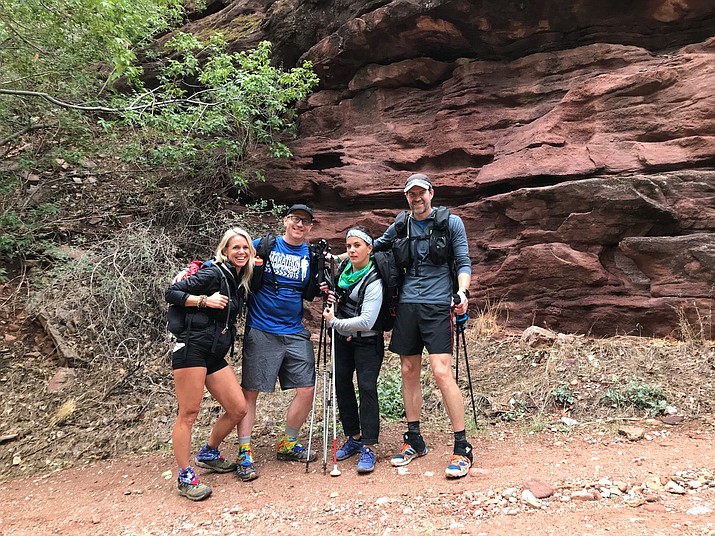 GRAND CANYON, Ariz. — Anyone who has ever wandered even a mile down Bright Angel or South Kaibab trail can attest to the fact that going down is a lot easier than coming back up.

Now imagine doing that twice in one attempt, a feather in the cap of endurance athletes everywhere.

After doing some research, Army veteran and former EMT Shawn Cheshire, who lost her eyesight at age 34 after a brain injury, decided she wanted to set a record for a blind woman performing a rim-to-rim-to-rim trek of the Grand Canyon.

The men’s record currently stands at about 28 hours. With that number in her sights, Cheshire and her guide team traced the same route in around 24 hours, starting out at midnight Oct. 7. Although the team spent a lot of time hiking at night, Jesse Crandall, who assisted Cheshire as a guide, said that was one of the least challenging aspects of the journey.

“The cool weather was a bonus for us, we were able to keep a good pace without the heat,” he said.

And Cheshire chuckled as she pointed out that darkness is what she sees every moment.

Scott Drum, another guide who recently summited a mountain with Cheshire, said one of the biggest challenges is setting a time goal that everyone can agree on, and then easing off if you need to.

“You have to set a group time goal and kind of put all your eggs in one basket, but it’s okay if you don’t achieve it because there are always secondary goals,” he said. “The challenge is being able to let yourself off the hook.”

Sara Schulting-Kranz, who accompanied Cheshire during a June hike down to Phantom Ranch, said it was important for the team to dig deep as a group to support each other during the journey.

“We made an agreement as a group to get Shawn through this safely, to help her do what she came here to do,” she said.

Cheshire, Schulting-Rank, Drum and Crandall kept in formation with Cheshire to help her navigate the trails. Crandall said two guides were in front of Cheshire at all times, helping to call out obstacles and let her know about upcoming steps. Additionally, the person directly in front of her fastened bells around their waist so Cheshire could follow the sound. One person trailed behind to call out any places where she might need to step around rocks or other debris in her path.

Along the way, however, Drum said Cheshire’s sense of direction in following the bells was so good, she often turned or avoided obstacles before he needed to call them out.

Cheshire lost her eyesight in an accident working as an emergency medical technician — she was moving a patient when she slipped and fell, hitting her head on the back of her ambulance. The resulting brain injury caused her to lose her eyesight completely.

Cheshire said after being sighted for her whole life, she became depressed, and the VA hospital near her home in Syracuse, New York, recommended taking up physical activity to help combat it. She began running with a trainer and was later introduced to tandem cycling. She qualified for the 2016 paralympics in Rio in 2016 and hopes to return to the 2020 paralympics in Tokyo.

“I haven’t always been blind, and I find that movement is a way to help challenge myself,” Cheshire said of her decision to hike Grand Canyon. Cheshire said she and Schulting-Kranz came to the Grand Canyon together in June, hiking down and staying at Phantom Ranch for two days before hiking out.

“We did some research and couldn’t find any records of a blind woman completing the rim-to-rim-to-rim crossing, and so I said why not? Let’s do it. I didn’t just want to complete it, I was really looking to break the blind men’s record,” she said. “This was a complete unknown, I’ve never done anything like this before.

A blind woman has never done this, so just completing it would have been huge, but we didn’t just complete it, we crushed it.”

Although she can’t physically see, Cheshire knows the lay of the land through her other senses. She only tripped up once during the entire hike — on a flat stretch of even terrain. Schulting-Kranz said it was an eye-opening perspective watching Cheshire navigate.

“She would be hiking and she could point out where it’s wide open, there’s a bush to my right, we just passed a big tree,” she said. “It was incredible.”

Crandall said the entire group was able to benefit from hiking alongside Cheshire as well.

“At one point she said ‘What’s over there,’ and we looked and there was a group of mule deer walking by,” he said. “We never would have even see it if she hadn’t heard it and pointed it out for us.”

Although everyone on the trek is very fit, there were times when it was challenging to keep going. In order to keep pace with their time schedule — a schedule made easier by the unseasonably cool weather — the group kept chugging along, stopping only to eat, drink, tie shoes or take a bathroom break. Pauses with purpose, Crandall called it.

Cheshire said once you’ve been on your feet for that long, it’s essential to keep moving. Otherwise, she said, once you sit down, your muscles don’t want to function anymore when you get back up.

Schulting-Kranz said the last two miles were the toughest, but Cheshire just kept repeating “every step,” a mantra that helped the team finish in record-breaking time.

The rim-to-rim-to-rim hike is only one stop on Cheshire’s planned to-do list. She said she plans to do more research, finding adventures that blind persons have yet to make a name conquering.

“I’ll have to do some more research, but my goal is to find everything a blind woman has not done, and then do all of it,” she said. “There’s just no visually-impaired women out doing things, and I’m gonna go and be the first to do them. I don’t know exactly what it is (the next goal) but whatever it is will be pretty spectacular.”

Read the Article on GrandCanyonNews.com