from the village of Cizur with Pamplona in the distance

I have had three various people ask me this week, “Where do YOU go to find guidance in your life?” Smiling as the words passed through my brain, visions of all my Elder Friends flashed before my eyes.

As a society, we take for granted those that are older than us. I don’t understand why. Why would you put down a good book that holds the key to life when it sits before you?  I gain so much insight and wisdom from those that are older than me, many of which I have sat and talked up while resting trailside.  Some of those elder friends of mine have become my best friends.

I think about Ken Hayes, who at 77 years old was hiking up the North Kaibab Trail in the Grand Canyon.  Seeing him alone, I knew he had a story to share. Stopping to rest alongside him, we talked life.  I learned it was his birthday.  I learned about his family, his life, his Conquest in the Canyon.  His blue eyes showered me with kindness, empathy, and knowledge about living.  We instantly became best friends.  As my life fell apart and back together again over the last three years, I called Ken for guidance.  His own Life Journey and Experiences gave me Wisdom and Clarity for my own.  Coincidentally, it was his cabin in the Appalachian Mountains where I chose to escape and write much of my upcoming book.

Every so often, I ask Guest Bloggers to write about their experiences in life.  At 77 years old, Jim “Papa” Reach is a man unlike many men that I know.  He also Chooses to Truly Live and Live Boldly.  “Papa” Reach’s grandkids and my middle son went to the same school.  I would often times see “Papa” Reach at sporting events, coaching alongside his son, always a part of bettering our community.  He is a true inspiration, role model, and one that Values his family and friends beyond anything in life.

“Papa” Reach recently hiked The Camino de Santiago, a pilgrimage route to the shrine of the apostle St. James the Great in the Cathedral of Santiago de Compostela in Galicia in northwestern Spain, where tradition has it that the remains of the saint are buried.  Many follow its route as a form of spiritual growth and enlightenment.  Please enjoy reading about “Papa” Reach’s trek, taking nuggets of his journey and applying them to your own.  That is what learning from your Elder’s is all about. 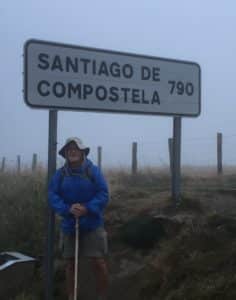 “Put more emphasis on the inner path rather than the physical one.  Live everyday to the fullest, but don’t be in a hurry.”

TELL US A LITTLE ABOUT YOURSELF:

I am a 77-year old graduate of the University of California, Los Angeles that has been happily married to my wife, Carrie Patrick Reach, for 54 years.  We are active, retired college teachers that reside in Newport Beach.

We have three successful children, and seven special grandchildren that all live in southern California.

As I mentioned above, I am active.  Always have been.  Athletics have always been a part of my life—as a participant and coach in high school and college, and then as a college baseball coach.

After completion of college, I was a recreational runner for years until my knees no longer allowed me to.  I then switched to biking where I rode for years until I had back complications.  About fifteen years ago, I turned to daily walking.  I currently walk 4-6 miles six days a week.  I am a member of the Newport Beach Oasis Senior Fitness Center where I stretch daily and lift light weights every other day.

Satchel Paige, the great baseball pitcher from years past, who was still pitching at the age of 60, was once asked how he continued to have success in his field at such a late stage in his life.  He replied, “Keep moving.  Don’t look back.  Someone might be gaining on you.”  I have tried to follow this advice throughout my adult life. 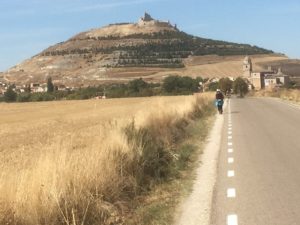 TELL US ABOUT YOUR LATEST ADVENTURE.  WHAT PROMPTED YOU TO TAKE ON THIS CHALLENGE?

I am an advocate of PBS television and about ten years ago I was watching a Rick Steve’s travel documentary on Spain’s Camino de Santiago.  I was intrigued.

As walking became a part of my daily schedule, I met many people on the sidewalks and in the canyons of Orange County.  Earlier this year, I met a 71-year old woman while hiking Bomer Canyon in Irvine.  She had recently completed the Camino de Santiago (482 miles across northern Spain) in 45 days by herself.   She plans to do it in the opposite direction next year.  Her story was amazing.  I was now more than just intrigued.

Then I saw the movie “The Way”  (2010), starring Martin Sheen, about a father/son relationship that ended up with the father paying homage to his son’s death by walking the Camino.  I was “hooked”.  I now believed I could do this. 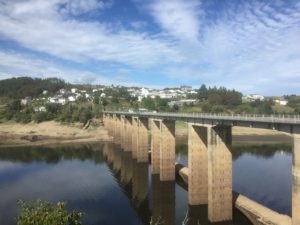 WHAT WAS YOUR GREATEST ACCOMPLISHMENT DURING YOUR ADVENTURE?

I originally planned to complete the Camino in somewhere between 31-35 days, averaging 15 miles a day.  At the completion of my walk to Santiago de Compostela, I had covered the Camino Frances walk in 28 days, including a one day stop to rest in the city of Leon.  I averaged just under 18 miles per day on the trail.

While waiting in line to receive my compostela (certificate of completion) in Santiago, I was answering questions regarding my trip when the interviewer mentioned to me that he had met with 100 pilgrims this day and at age 77, I was the oldest one to complete the journey.  Cool!

WHAT WAS YOUR BIGGEST CHALLENGE DURING YOUR ADVENTURE?

I missed my family.  I knew I would.

It is particularly important to stay focused on the walk—particularly when going downhill.  Contrary to what many people may think, it can be more difficult when descending—at times easy to lose your balance. 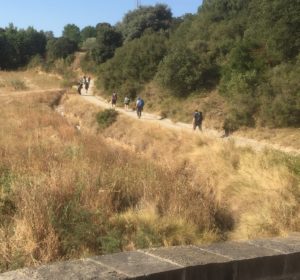 DID YOU EVER HAVE A MOMENT WHERE YOU QUESTIONED YOURSELF, ABILITIES, OR DECISION TO TAKE ON THIS ADVENTURE?  IF SO, WHAT DROVE YOU TO CONTINUE?

I was well aware that the first day of the trek (going thru the Pyrenees Mountains) would be the most strenuous.  However, I had no idea that it would be as difficult as it turned out.  The first day’s walk from St. Jean Pied de Port, France to Ronscevalless, Spain left me totally spent.

I had trained for months here in southern California with my intention being that the actual Camino would end up being easier than my training walks.  I was shocked.

After analyzing my first day on the Camino, I believe that getting only 3 hours sleep in the two days prior to my departure from St. Jean Pied de Port was the major reason for my struggle.

Upon arrival in the late afternoon at SJPDP, my original plan was to take a day to get acclimated before beginning the Camino.  Energy and euphoria got the best of me.  I strayed from my original plan and left amidst darkness the next morning.  It was a long day and I paid the price.  Thus, I finished day 1 with doubt as to whether I could do this.

When I awoke on the morning of day 2, I was refreshed and full of the three “V’s”—vim, vigor and vitality.  There was no longer any doubt.  I was moving on. 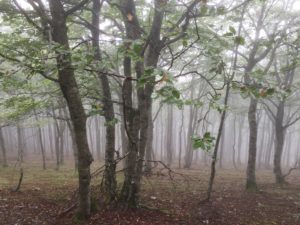 WHAT ARE SOME OF THE THINGS THAT YOU LEARNED ABOUT  YOURSELF OR OTHERS ALONG THE WAY?

I had heard and read about locals welcoming pilgrims all along the way for centuries.   I found this to be true.  Goodwill was embedded throughout my journey.  I witnessed many instances where individuals (both peregrinos and locals) went out of their way to assist others.

A dilemma I was faced with in my early preparation for the Camino was whether to walk alone or with a fellow traveler(s).  While there is security in numbers, I chose to walk alone.  I looked forward to doing what I wanted to do when I wanted to do it.  This is not easy to do when you are traveling with companions.

There were numerous instances along the way that I enjoyed the company of fellow peregrinos, but the bottom line was I looked forward to the start of each day’s challenge alone with great anticipation.

In conclusion, I can say that I felt much safer traveling alone in Spain then I would have here at home in the United States. 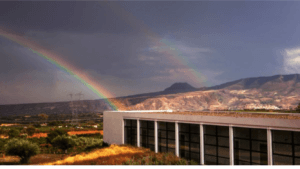 WHAT SURPRISED YOU THE MOST ABOUT YOUR JOURNEY?

Unquestionably, the weather.  I was on the trail for 27 days without rain.  This is unheard of in northern Spain.  There is a saying that “The rain in Spain falls mainly on the plain”.   To make a long story short, it didn’t (rain).

Before reaching the western region of Galicia, it had rained for 7 consecutive days in the area of Santiago de Compostela.  The day I arrived, the rain stopped.  I spent 3 days in the city with exceptional weather.  Two days later, while in Madrid, I checked the weather forecast for SDC.  It said rain was expected for the next 7 days.  Go figure.  Someone was watching over me.

Another factor that allowed me to progress across the country at a much faster pace and cover more ground was the fact that I experienced no foot problems on my journey.  I was pain free throughout the trip.  Many peregrinos suffer from blisters and/or ankle problems. 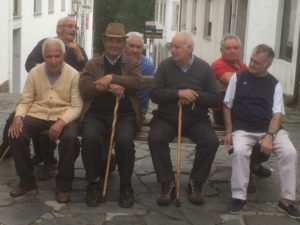 DID YOU MEET ANY NEW PEOPLE?  HOW?

Along the trail and stops throughout the way, I met and walked with peregrinos from all over the world.  Many have asked me where these pilgrims came from.  I tell them it is easier and quicker to list the countries they didn’t come from.

HOW HAS YOUR EXPERIENCE CHANGED YOU?  WHAT LIFE LESSONS DID YOU LEARN?

It didn’t.  I was not looking for a life changing experience.

I feel very good about my life.  I am in excellent health and blessed with a wonderful wife and family.  It doesn’t make any difference how old you are if you have your health.  It is a joy to be alive.

Life is what you make it. 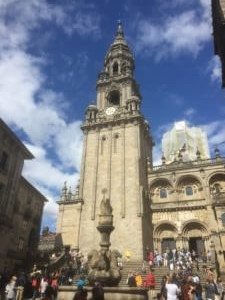 WHAT ARE YOU HOPING OTHERS TAKE AWAY FROM YOUR EXPERIENCE?

Put more emphasis on the inner path rather than the physical one.

Live everyday to the fullest, but don’t be in a hurry.  Enjoy the people and sites around you.  I picked up a new expression along the Camino—“Tether your camel!”  I like it.  Stop and smell the roses. 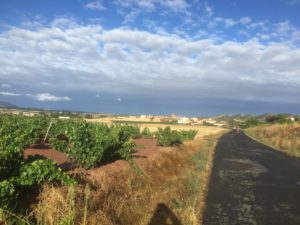 WHAT ADVICE WOULD YOU GIVE TO SOMEONE ELSE CONSIDERING A CHANGE WITHIN THEIR OWN LIFE?

Ask yourself:  Why am I doing this?

Discovering who you are may be more important than where you are going.

You have the power!  If the plusses outweigh the minuses, go for it!  A positive mental attitude will produce and maintain success. 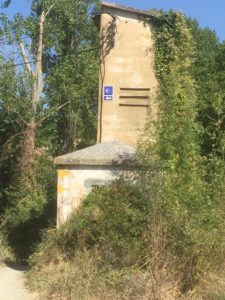 WHAT’S NEXT FOR YOU?

I am planning a surprise for my 80th birthday.  In the meantime I am just going to keep moving.

My wife.  My grandchildren.

Yes!  The recipe for stuffed zucchini blossoms I ate along the Camino.

Mix the rice with all the chopped ingredients, ½ cup olive oil and lemon juice.  Take small amounts of the mixture and stuff the zucchini flowers.  Fold over the ends to seal the stuffing inside.

Separately whip the eggs.  Dip the flowers into the whipped eggs and then coat them with flour.   Salt and pepper to taste.  Fry with the remaining olive oil in skillet until lightly browned.

ENJOY! It doesn’t get any better.